Born in Linz, Austria in 1903, Viktor Lowenfeld had always been drawn to the arts. Dr. Lowenfeld graduated from the College of Applied Arts in Vienna, as well as the Academy of Fine Arts in the same city. He later received his doctorate in Education from the University of Vienna, and during this time served as an elementary and secondary school teacher. Lowenfeld joined the Hampton Institute in Virginia in 1939 as assistant professor of Industrial Arts, studio art teacher, and later Chairman of the Art Department. In 1945 he was named curator of the distinguished collection of Black African Art at the Hampton Institute. Lowenfeld came to The Pennsylvania State University as professor of Art Education in 1946. Ten years later he became head of the newly founded Department of Art Education. He stayed in this position until his death in 1960.

Viktor Lowenfeld, professor of art education at the Pennsylvania State University, helped to define and develop the field of art education in the United States.
Austrian born Lowenfeld taught art in the elementary schools in Vienna while attending the Vienna Academy of Fine Arts. Then, the Vienna Kunstgewerbeschule as well as studying sculpture under Edward Steinberg. Inspired by Sigmund Freud, Lowenfeld developed ideas on the therapeutic uses of creative activity in the arts resulted in several books: Die Entstehung der Plastik (The genesis of sculpturing, 1932), Plastiche Arbeiten Blinder (Sculptures of the blind, 1934) and his first English and his first English publication, The Nature of Creative Activity (1939).
During World War II Lowenfeld taught psychology at the Hampton Institute in Virginia. A number of his Hampton students became prominent artists, including John Biggers, Elizabeth Catlett, and Samela Lewis. Lowenfeld was chairman of art education1946 to 1960. In 1947 Creative and Mental Growth was published and became the single most influential textbook in art education during the latter half of the twentieth century, having gone through seven editions. This text was widely adopted in courses for prospective elementary school teachers throughout the United States. His book describes the characteristics of child art at each stage of development and prescribes appropriate types of art media and activities for each age. Its strong psychological orientation provides a scientific basis for creative expression and the practices that cultivate it Lowenfeld's views of child art were grounded in constructs drawn from the psychoanalytic school of psychology in which evidence of aesthetic, social, physical, intellectual, and emotional growth is reflected in the art of children and the concept of stages of growth in art. He saw the free expression of children in artistic media as necessary for the healthy growth of the individual. A number of education students were drawn to Lowenfeld both through his text Creative and Mental Growth, and through extensive lectures and presentations given at state and national conferences throughout the late 1940s and 1950s.

The Scribble stage is made up of four sub-stages. (a) Disordered - uncontrolled markings that could be bold or light depending upon the personality of the child. At this age the child has little or no control over motor activity. (b)Longitudinal - controlled repetitions of motions. Demonstrates visually an awareness and enjoyment of kinesthetic movements. Circular - further exploring of controlled motions demonstrating the ability to do more complex forms. Naming - the child tells stories about the scribble. There is a change from a kinesthetic thinking in terms of motion to imaginative thinking in terms of pictures. This is one of the great occasions in the life of a human. It is the development of the ability to visualize in pictures.
2. PRESCHEMATIC
(4 to 6 years)

The preschematic stage is announced by the appearance of circular images with lines which seem to suggest a human or animal figure. During this stage the schema (the visual idea) is developed. The drawings show what the child perceives as most important about the subject. There is little understanding of space - objects are placed in a haphazard way throughout the picture. The use of color is more emotional than logical.
3.SCHEMATIC (7 to 9 years) 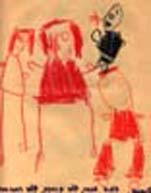 This stage is easily recognized by the demonstrated awareness of the concept of space. Objects in the drawing have a relationship to what is up and what is down. A definite base and sky line is apparent. Items in the drawing are all spatially related. Colors are reflected as they appear in nature. Shapes and objects are easily definable. Exaggeration between figures (humans taller than a house, flowers bigger than humans, family members large and small) is often used to express strong feelings about a subject. Another technique sometimes used is called "folding over" this is demonstrated when objects are drawn perpendicular to the base line. Sometimes the objects appear to be drawn upside down. Another Phenomenon is called "X-ray". In an x-ray picture the subject is depicted as being seen form the inside as well as the outside.

Dawining realism is also known as the gang age. Group friendships of the same sex are most common. This is a period of self awareness to the point of being extremely self critical. The attempts at realism need to be looked at from the child's point of view. Realism is not meant to be real in the photographic sense rather than an experience with a particular object. In this regard this stage is the first time that the child becomes aware of a lack of ability to show objects the way they appear in the surrounding environment. The human is shown as girl, boy, woman, man clearly defined with a feeling for details often resulting in a "stiffness" of representation. Perspective is another characteristic of this stage. There is an awareness of the space between the base line and sky line. Overlapping of objects, types of point perspective and use of small to large objects are evident in this stage. Objects no longer stand on a base line. Three dimensional effects are achieved along with shading and use of subtle color combinations. Because of an awareness of lack of ability drawings often appear less spontaneous than in previous stages.

5. THE PSEUDOREALISTIC STAGE
(ll to 13 years)

In the previous stages the process in making the visual art was of great importance. In this stage the product becomes most important to the child. This stage is marked by two psychological differences. In the first, called Visual, the individual's art work has the appearance of looking at a stage presentation. The work is inspired by visual stimuli. The second is based on subjective experiences. This type of Nonvisual individual's art work is based on subjective interpretations emphasizing emotional relationships to the external world as it relates to them. Visual types feel as spectators looking at their work form the outside. Nonvisually minded individuals feel involved in their work as it relates to them in a personal way. The visually minded child has a visual concept of how color changes under different external conditions. The nonvisually minded child sees color as a tool to be used to reflect emotional reaction to the subject at hand.

Art at this stage of life is something to be done or left alone. Natural development will cease unless a conscious decision is made to improve drawing skills. Students are critically aware of the immaturity of their drawing and are easily discouraged. Lowenfeld's solution is to enlarge their concept of adult art to include non-representational art and art occupations besides painting (architecture, interior design, handcrafts, etc.)

Note:The above is a brief summary of the subject, for more information

refer to the following book. With the exception of the illustrations all of the above content is from:
CREATIVE AND MENTAL GROWTH, Viktor Lowenfeld, Macmillan Co., New York, 1947.

Laura H. Chapman is a consultant and writer on arts education based in Cincinnati, Ohio. Her teaching experience, ranging from preschool to adults, spans rural, suburban and inner-city schools. She has taught in the undergraduate and graduate art education programs at Indiana University, The Ohio State University, University of Illinois and University of Cincinnati. She has a special interest in pre-K–12 art education in public schools and related issues in teacher education, curriculum and assessment.
Laura has been a consultant for the National Endowment for the Arts, National Assessment of Educational Progress in Art, Educational Testing Service, National Instructional Television, KnowledgeWorks and several educational programs of The J. Paul Getty Trust, among others. She has given invited addresses, seminars and workshops in more than 40 states, Canada, Australia, England, Belgium, Germany, The Netherlands and New Zealand. Selected writings have been translated into Modern Greek, Arabic, Spanish, Chinese and Dutch.

In 2000, a national panel selected her Instant Art, Instant Culture: The Unspoken Policy for American Schools (1982) as a "Book of the Century in Education." In recent lectures and writing Laura has addressed the No Child Left Behind Act, national initiatives in education policy and issues in advocacy. 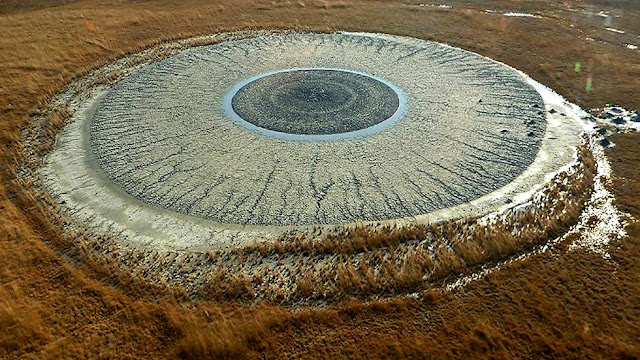